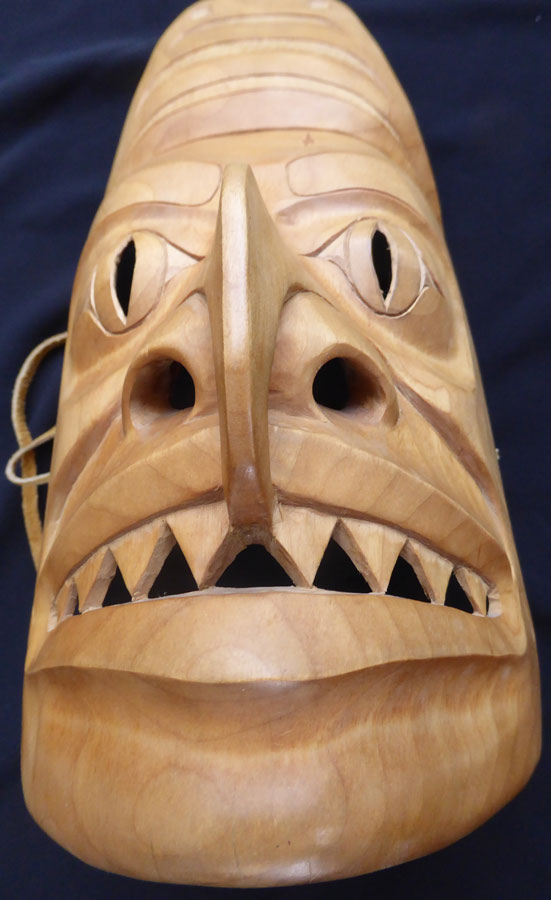 This mask incorporates all the classic features of a dogfish which is signified by the mask`s downturned mouth, triangular teeth, gill slits on each cheek and elongated forehead with another set of gill slits. The two circles represent the nostrils which appear on the underside of the head of an actual shark. Dogfish images also feature a hooked, beakish nose. The carving and smooth finish on this mask is exquisite making it a fine representation of the Dogfish mask.

Dogfish is an important crest and mythic being among Northwest Coast art. In early times the dogfish crest was applied to a wide range of utilitarian items as well as ceremonial clothing and regalia. The dogfish swims alone and is respected & even feared. They are believed to be able to enter the realm of the supernatural.

Ron studied art through all his high school years and he graduated with an additional Visual Art Specialty Diploma. Next, he graduated, as a top student, from the Gitanmaax School of Northwest Coast Indian Art in Hazelton. Ron then went on to study with Mircho Jackabow at Fraser Valley College where he earned a diploma in 1987. Since then, Ron’s work has gone worldwide. He was commissioned to carve a 36-foot totem pole for the town of Port of Trieste, Italy. He also carved poles for cities in the USA and Japan.