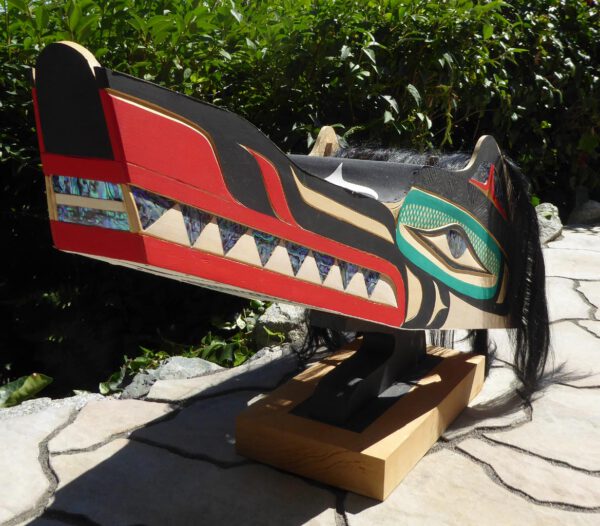 This headdress is dance rigged as it is made from thin cedar with canvas on the top and bottom for the purpose of making it lightweight for the dancer.

The canvas is painted on the top and bottom in traditional Northwest Coast Design.  Horsehair flows from the rear and abalone shell is used extensively for the eyes, teeth, ears, and mouth.  Abalone is an edible mollusc whose shell has a colourful iridescent lining which is used for decorating important pieces.

The wood above the eyes painted black is entirely textured as shown is one of the photos.

Patrick Amos was born in 1957 on Nootka island into the Mowachaht Band, located on the western coast of Vancouver Island in British Columbia, Canada. The Mowachaht Band is part of the Nuu-chah-nulth Nation which encapsulates 14 tribes that occupies the majority of the western coast of Vancouver Island. Patrick first started his art endeavors in 1976 designing and creating limited edition prints that he sold to the Royal British Columbia Museum shop in Victoria, British Columbia. Three years later he started an apprenticeship under the guidance of Tony Hunt Sr. to master his carving skills. Today the museum holds numerous paintings and prints of Patrick Amos’s art in their permanent collection.Many Nuu-chah-nulth artists have influenced Patrick’s work. In his early teens, master artisan Henry Hunt was a catalyst for his inspiration and interest art. He worked closely with Art Thompson and was greatly influenced by Joe David. In 1984 Patrick started an apprenticeship with Tim Paul, a chief carver at the Royal British Columbia Museum, where he learned and participated in the creation of traditional Northwest Coast art. Some of his accomplishments include but are not limited to: